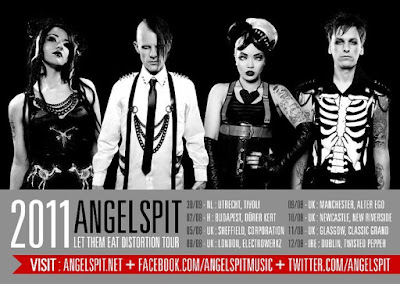 It's been a while since I visited the Corporation nightclub back in my home town of Sheffield, and it was pleasant to revisit the sticky floor and the lack of oxygen for a night of mayhem. After catching up with old friends from my days hanging around the Sheffield dark alternative scene, the lights went down and the stomping began. 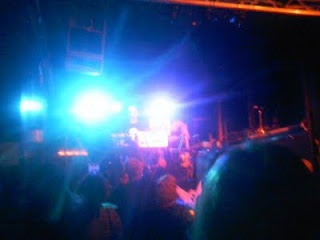 Right, I don't generally like this brand of Industrial music that much, but Dirty K's own brand of hugely danceable noise was great fun. Mixing elements of pure Industrial, hard dance music and powernoise, this UK duo laid down a breathless set of rhythms, samples and infectious, bouncy electronics that rapidly warmed up the jaded Corp crowd. Not an act I'd choose to listen to anywhere but in a live situation, but definitely an act who are building a reputation on their talent rather than any gimmicks. 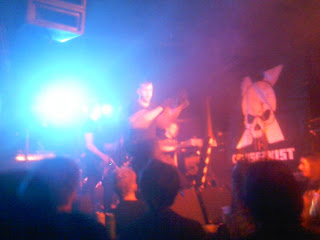 Shrewsbury's Cease2xist are up next, and the three-piece band are a fantastic proposition live, demonstrating a massive amount of energy and conviction. Their take on harsh Industrial (with an almost inaudible guitar thanks to a typically muffled Corporation small-room mix) is punchy and stompy in all the right places, but it's very, well, 2002. As their set progresses, I have to wonder how many 3ulogy gigs they went to back in the day, as they sound almost exactly like that act (now split, which gave rise to the bands NEKRO DRAKO and PR0T0TYPE) did during their time together. A chaotic cover of 'I wanna be your dog' is fun, but it's their own material that has more punch. 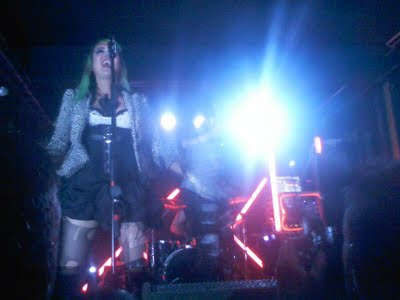 It's been four years since I last saw Australian cyberpunks Angelspit play live, and was hoping that the wait would be worth it. Thankfully it was, and despite a lengthy quiet period a couple of tracks in due to a tech issue, the band (now at four members instead of the duo of yore) laid waste to the small room's tiny stage in fine style (despite the ludicrous heat).

Vocalists/Electronics manipulators DESTROYX (aka cult fashion designer Amelia Arsenic) and ZOOG VON ROCK (aka “Caaarl!” as he introduced himself to me in a broad Aussie accent afterwards) are massively energetic throughout the hour-long set, never missing a beat of their rapid-fire lyrics (or indeed the fx-laden vocal sections that require them to switch very quickly to other mics), while guitarist Valerie Gentile (The Brooklynite also known for her work with The Cruxshadows) and drummer Matt have brought a new vigour to the Angelspit live experience. 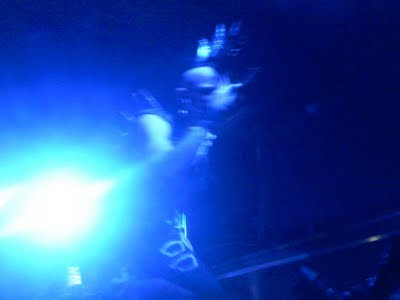 The transformation is amazing, with older material like 'Maggot' and 'Vena Cava' morphed into vicious and nasty punk assaults, finally bringing Angelspit's punk feel to the forefront. This is never more in evidence than during 'Wreak Havoc', which has gone from being a strong Industrial track to being a monstrously violent Cyberpunk anthem.

The band are clearly having a blast, and as the set progresses, they gather a fair few new fans if the response was anything to go by. I was down at the front for the whole show, and ended up dowsed in the bands' sweat from their furiously entertaining performance, during which other delights included 'Glitchbomb', 'Toxic Girl', 'Wolf', the powerful 'Fuck The Revolution' and more. The venue was left sweating and spent, as were the band, but all four members went straight from the last notes of the final track into signing autographs, chatting with fans and posing for pictures. I met each member in turn and was most pleased by how very friendly and accommodating they all are. Not an ego in sight. A perfect end to a great evening's entertainment.

Ratt are back (again), but this time with the closest we'll ever get to the original lineup. Their new album sees a return to their classic sound, and on the strength of this rather marvellous tune, it looks like they've come up with something very cool indeed. The hook to 'Best of Me' is guaranteed to get stuck in your head. Good to have them back. 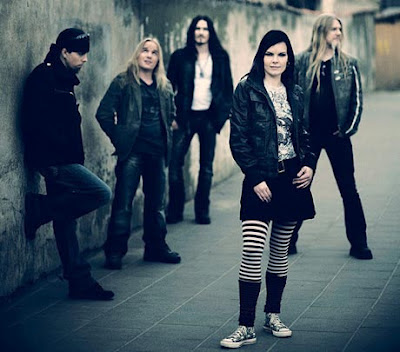 NIGHTWISH: ANNETTE OLZON OUT, FLOOR JANSEN IN (FOR NOW)

Nightwish with now ex-vocalist Annette Olzon Anyone who knows me is aware that I am a huge fan of Nightwish, and I don't care one bit if people want to mock me for it. Nightwish are an incredible band, and while their latest album, “Imaginaereum” didn't grab me as much as its predecessors, they remain a band which I hold very dear. The news of Annette Olzon's departure from the band (Five years on from the ousting of original vocalist Tarja Turunen) came as something as a shock, so what the hell happened? The story is all over the internet if you want the full details, but in brief, a few days ago Annette was hospitalized with a selection of horrible health issues. She was unable to play a Nightwish show due to recuperating, but the band went ahead with the gig by calling in Kamelot's two backing singers to fill in. The show was played, with the band and audience taking equal turns to perform, be it full songs with the ladies or as giant karaoke sessions. Annett 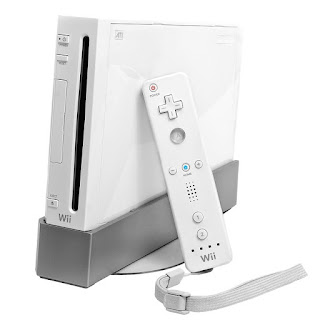 The Weturn of the Wii?

A few months ago, I bought our two young sons a second hand Wii console and some games, with the intention of getting them used to the controls, gestures and concepts of games with wireless controllers before we eventually upgrade them to a Nintendo Switch . The waiting period has been unintentionally extended, as they are both having a blast with the Wii and the stack of games I've picked up. Some games are the typical Wii novelty titles full of mini games, while others star branded characters like Sonic, Mario, Lego Batman, Transformers, Ben 10 and the like. My wife and I have had a ton of fun reacquainting ourselves with old songs on the Just Dance games, and our bank balance hasn't been harmed by the console or the games, as I picked the console up for £18 from CEX, with the Wii games I bought priced from 50p to £5. The prohibitively expensive prices of Nintendo Swicth games have kept us checking CEX shelves and charity shops for cheap Wii games to maintain the family